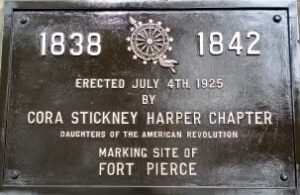 This marker was erected on July 4, 1925, at the Old Fort Pierce Park. The monument marks the site of Fort Pierce, a military post, that was named for its first commander, Brevet Lieutenant Colonel Benjamin Kendrick Pierce. Brevet Lt. Col. Pierce was the brother of President Franklin Pierce. The military post was built in 1834, and decommissioned in February 1842, following the end of the Second Seminole War. The fort was later destroyed by fire in 1843.

At some point in time the marker went missing, and a new one was commissioned and installed in 2017. In the interim, on September 1, 1980, Jimmy York, of local Boy Scout Troop 476, completed his Eagle Scout Project by rededicating the site. The original marker was subsequently recovered and is now on display in the St. Lucie County History Museum.

You can read more about the Fort Pierce and Fort Capron monuments here.

You can visit the marker at the Old Fort Pierce Park at 975 South Indian River Drive in Fort Pierce. 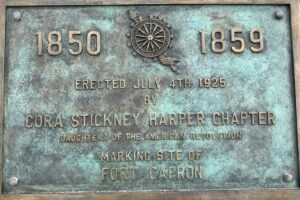 This marker was erected on July 4, 1925, at what is now considered Saint Lucie Village, on the north end of Fort Pierce. The plaque marks the approximate site of Fort Capron. Fort Capron was named after Captain Erastus A. Capron, who was a member of the First Artillery. The fort was built in March 1850, and was decommissioned on June 14, 1859, by Captain Abner Doubleday. The fort was used during the Third Seminole War. 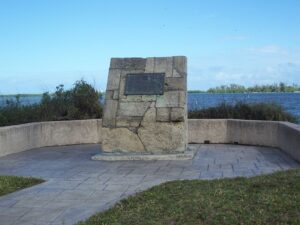 You can visit the monument marking Fort Capron at the end of Chamberlain Boulevard in Fort Pierce. The monument overlooks the Indian River. 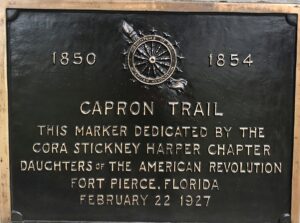 This marker was erected on February 22, 1927, at the San Lucie Plaza, now Casa Caprona Apartments. The monument marks the approximate location of the eastern terminus of the Capron Trail that connected Fort Capron with Fort Brooke. Fort Brooke was located in present day Tampa.

Planning for this monument began in 1923. The first newspaper article about marking the site was published in the Tampa Tribune on January 17, 1923.

Subsequent articles show that in 1926, then regent, Frances L. McCarty, approached the president of the corporation that had purchased the site of old Fort Capron about a suitable marker for the site of the original trail. This partnership led to the erection of the marble shaft monument and the bronze plaque markers at its base. News reports of the day show that the unveiling was attended by over 100 people. Frances McCarty was the mother of Florida’s 31st Governor, Daniel T. McCarty, Jr., and her great-granddaughter is a member of our chapter today!

You can visit the Capron Trail monument at 2605 Saint Lucie Boulevard, Fort Pierce. 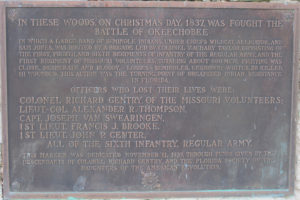 The plaque marks the site of the Okeechobee Battlefield. The battle which took place on December 25, 1837, is considered the major opening battle of the Second Seminole War, which took place between 1835 and 1842.

The marker was erected to remember the Battle of Okeechobee on November 11, 1939, by descendants of Colonel Richard Gentry. Cora Stickney Harper Chapter, NSDAR, and Seminole Chapter, NSDAR, were co-sponsors.

The battlefield was placed on the National Registry of Historic Places during the 1960s.

On February 4, 2012, the plaque was moved from the battlefield to the new state park located at 3500 S. E. 38th Avenue, Okeechobee, Florida.

The next Cora Stickney Harper Chapter, NSDAR, meeting is Tuesday, October 11. We hope to see you there!

Who are DAR members? They are a lot like you. They are vibrant, active women who come from diverse backgrounds and have a variety of interests. Their common bond is their lineal descent from Patriots of the American Revolution.

Florida has a DAR chapter near you! Visit the Florida State Society, Daughters of the American Revolution to find a chapter. FSSDAR

Visit the National Society Daughters of the American Revolution to learn more. NSDAR

Florida has a DAR chapter near you! Visit the Florida State Society Daughters of the American Revolution to find a chapter.

Visit the National Society Daughters of the American Revolution to learn more.