The Alafia River Chapter NSDAR was formed in 1982 in Brandon, Florida. Susan Mountain and 17 National Society Daughters of the American Revolution (NSDAR or DAR) members created the chapter, which has grown to more than 119 members. The members meet monthly from September to May.

The chapter gets its name from the local Alafia River, which was home to the Tocobaga Indians for centuries. In the 16th century, expeditions by Panfilo de Narvaez and Hernando de Soto of the coastal areas of Tampa Bay resulted in the first maps of the Alafia River. Early maps show the translated name as the “Hunting River,” Alafia is a native word meaning “River of Fire,” due to the strong red/brown color caused by tiny algae spores in the water. 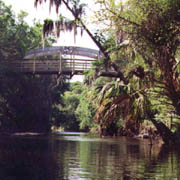